Liz Thomson is a London-based journalist, author and broadcaster, and the co-founder of Square Roots Productions CIO and, in New York, of The Village Trip, a non-profit arts festival. She was a founding trustee of the Desmond Elliott Prize for first novels.

A contributing editor to TheArtsDesk.com, Liz’s work has appeared in newspapers and magazines around the world, among them The Times, Guardian, Independent, New Statesman & Society, Mojo, the Big Issue and the Washington Post.

From 1984-2008, Liz was on the staff of the business weekly Publishing News, latterly as Editor, a perch that gave her a unique perspective on both the domestic and international book trade. She was the founding Editor of BookBrunch, the online bulletin and website for the publishing industry, writing for it daily from 2008-15. Along the way, she has been Literary Editor of Chic and from 1997-2008 wrote a weekly column on publishing for the Independent. 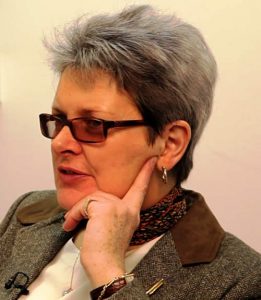 Throughout, Liz has written extensively on various aspects of popular music and the arts. A contributor to The New Grove Dictionary of Music & Musicians, she is the co-editor (with critic David Gutman) of quasi-academic studies of John Lennon, Bob Dylan and David Bowie, which have been published in Britain, the US and Japan. She has lectured at Liverpool University’s Institute of Popular Music, Kingston University, University College London and Oxford Brookes, and has been a Visiting Fellow of the Open University Sixties Research Group.

Liz’s latest book is a biography of singer and activist Joan Baez, whose music – a chance discovery when she was 12 years old – would influence much of what followed. Joan Baez: The Last Leaf, which puts Baez’s remarkable sixty-year career in context, was published internationally in October 2020.

Her director’s cut of No Direction Home: The Life and Music of Bob Dylan by the late Robert Shelton was published internationally in 2011 and a new edition is scheduled for publication in 2021. An Awfully Big Adventure (2013) marked the fortieth anniversary of the founding of Chickenshed, the uniquely inclusive theatre company championed by Diana, Princess of Wales.

Liz has broadcast widely, both in Britain and abroad, and has interviewed authors on platforms at Hay, Dartington, the Southbank and the Dubai literary festivals. She was named a Woman of the Year in 2005.

Liz gained her Bachelor’s degree in music at the University of Liverpool where her final-year dissertation examined the music of George Gershwin.

Liz can be contacted by email at elizabethmthomson@googlemail.com